A visit to Michelot is always one of the highlights of our cask tasting trips to Burgundy, the Mestre family are such good-humoured, gregarious characters, as well as highly-skilled winemakers.  The domaine became one of the most well-known in Meursault under the late Bernard Mestre...you can read more about him in our profile of Michelot, below.  Today the 23 hectare domaine is run by Bernard's grandson, Nicolas Mestre and his father Jean-Francois.

This year, we arrived on the weekend of the Paulée de Meursault', the enormous post-harvest feast which takes place in Meursault, for around 700 winemakers and guests, who vie to bring the most interesting or historic bottles to the event.  Nicolas and Jean-Francois were still recovering from the after-party at the domaine.  The Mestres clearly know how to enjoy life and this is certainly captured in the openness and accessibility of their wines.

Nicolas told us that in 2020 the Chardonnay vines went into physiological shut down in August, due to the low rainfall and warm temperatures, as noted at other domaines.  The effect of this was to pause the sugar accumulation phase of ripening, whilst at the same time the level of acidity actually rose, as moisture levels in the grapes fell and the acidity was concentrated.  This is the exact opposite of what one would expect in a hot August, so much so that Nicolas thought his refractometer was faulty when it told him the pH of the grapes was was falling.

The fresh character of the vintage is complemented by the approach in the winery.  Nicolas has been experimenting with inert ceramic 'eggs' as fermenting vessels in recent vintages and, in 2020, the Meursault Village has just 10% new oak.  This rises to around 15-20% in the lieux-dits and premiers crus.  The wines have a slightly reductive, struck-match quality which emphasies their minerality beautifully.  Jasper Morris MW gives the wines excellent scores (up to 92-95 points for the 1er Cru 'Les Genevrières', finding aromas of gunflint and flavours of citrus, grapefruit and saline notes on the finish, all of which convey the freshness and excellent balance of the 2020 vintage.

The picture below gives an idea of how empty the cellars are already at Michelot and this is only likely to worsen with the tiny harvest in 2021 to come, so we recommend taking advantage of this superb vintage. 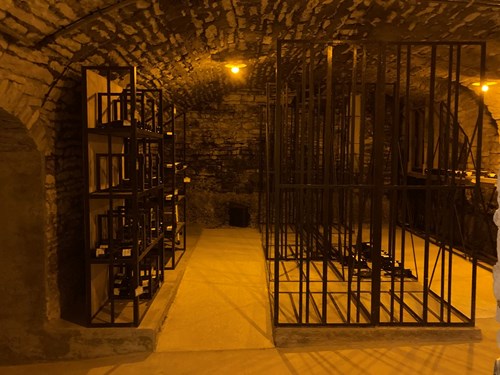 One of the most respected domaines in Meursault, Michelot make beautifully saline, mineral white wines in a modern, terroir-driven style.  Jean-François Mestre and his son Nicolas run the domaine, but we first visited here over twenty years ago, to taste with Nicolas' grandfather, Bernard Michelot.  It was the diminutive but charming Bernard who made the domaine so popular in the 1970s and 80s, producing wines in the rich, buttery style which became popular at the time, with plenty of new oak influence.  He was also one of the first producers to bottle his various lieux-dits as separate cuvées.

We were lucky enough to meet Bernard in the late '90s, and to taste vintages going back to the 1950s with him.  On our last visit, we were reminded of a story he used to tell about the Clos St. Felix lieu dit, a walled vineyard that sits immediately behind the domaine.  Bernard always used to say that he knew the Clos was warmer than the surrounding vineyards, as during the war, he used to break the nighttime curfew to visit his girlfriend.  When he returned late at night and climbed over the wall into the Clos, he would always notice how much warmer it was!

Winemaking, now under Nicolas, is more modern: less new oak, less batonage, and more focus on retaining fruit purity and terroir.  Taut but delicious when young, their Meursaults age effortlessly.  We recently purchased a small parcel of the 2004 Meursault Village from a private cellar and, sixteen years on, it was still drinking well.  The domaine currently has 23 hectares, with one of the largest holdings in Meursault itself.  Parcels of vines for the village wine are spread across the appellation, one reason why this is a benchmark wine, very representative of the wines from this village.

Michelot's Meursaults are enjoyed by Burgundy-lovers around the world but remain slightly below the critics' radar.  One Burgundy insider tells us that Jean-François Coche-Dury (possibly Meursault's greatest winemaker) says that Michelot is hugely underrated; their wines can be had for a tenth of the price of equivalents from Coche-Dury, i.e. the price of a bottle of Coche almost buys you a case of Michelot.

The Meursault lieux-dits 'Clos St Felix' and 'Les Grands Charrons' are a notch up from the village wine in price, but with more than enough added richness and saline, mineral freshness to justify this.  The Santenay Blanc 'Les Gravières' premier cru borders Chassagne and has more weight and seriousness to it than many a Chassagne or Meursault.  Four Meursault premiers crus are bottled, 'Les Poruzots, 'Les Perrières', 'Les Charmes' and 'Les Genevrières'.  'Les Genevrières' is named after the juniper trees which used to grow here.  This premier cru produces some of the richest and most structured Meursaults from the appellation, with excellent ageing potential.  The soil is clay/limestone with a subsoil of pebbles, volcanic rock and white limestone. Michelot have two parcels in the middle of the slope, at 250-275 metres above sea level.  Known as "Genevrières Dessus", these higher parts of the cru produce superior wines to those from the lower slopes.