How to tell if a wine is corked or faulty

Knowing how to identify when a bottle is faulty (or 'corked') is important to enjoying fine wine; not that it is a frequent occurrence, but because wine is subjective and when we doubt our own taste and smell, it can interfere with enjoyment.  The good news is that you can learn to identify the top most common wine faults quite reliably, with practice.

A word of caution:  To reliably identify and describe why a wine may be faulty, it's pretty fundamental that you should be able to systematically assess a good one!  See our coming article on how to taste.

NB The term 'corked' is commonly used to refer, broadly, to all wine faults, but also more specifically, to the most common fault, TCA:

This is the classic cause of a wine being 'corked'.  TCA (2,4,6-Trichloroanisole) is a compound produced by moulds and bacteria in the cork when they come into contact with chlorine-based antimicrobial agents used to process the cork bark.  The wine itself is often in perfect condition and free from faults, up until bottling, when the cork is inserted and the TCA taints the wine.

The incidence of cork-taint or TCA was very high in the early noughties.  Our experience was that easily one in twenty bottles were affected.  As wine consumption grew, cork producers like Portugal's Amorim harvested cork bark more aggressively to supply demand.  This was also the reason for the growth in popularity of screwcap closures.  Over the last decade or more, cork producers have improved their processes drastically and the issue is far less prevalent.  The kinds of measures include testing machinery which can detect, in an instant, even a single molecule of TCA in a cork before it leaves the factory.

The aroma of TCA is very distinctive, like mouldy, damp cardboard or damp washing which has not dried properly, or a damp dishcloth.  Each individual has a different threshold perception level for TCA (as with all aromas and flavours).  We have attended seminars on wine faults where a whole room full of trained wine professionals was divided into those able to detect the aroma in specially inoculated wines at a given low level and those who could not.  Some in the room even had a slight preference for those wines with low-level taint (possibly because the aroma and flavour profile is altered...see below).

Because of this, it is possible, if unlikely, that you may find a wine unpleasantly corky, whilst your dinner companion, or the sommelier or restaurant manager, can detect no fault.  Be warned though, once you know you have learnt to recognise the aroma, you will smell it in all sorts of places you hadn't noticed it before, for instance, as you are just about to bite into a juicy supermarket apple!...or anywhere chlorine-based cleaning products have been used.

Even more useful to know is that the effect of TCA is not just to impart a tainted aroma, but also to suppress fruit aromas and flavours.  In fact, the latest reseach suggests that TCA works by blocking up your sense of smell, preventing you from detecting other aromas.  If a wine seems generally lacking in the expected in aroma and flavour, it's possible that a low level of TCA (below your perception threshold) is the cause.   Armed with this knowledge, if you then look for a cork-taint aroma, you may notice it.

Once TCA is in the wine, it stays there almost indefinitely.  When we encounter 10 or 20 year-old bottle with cork-taint, we can tell that the fault has nothing to do with storage, but dates back to the moment the cork was inserted.  This is important when it comes to determining what to do about a faulty wine.  If we complain to a Burgundy domaine that their wine has premature oxidation (see below) they can rightly say that it could have been due to how the wine has been stored, whereas TCA can reliably be traced back to an issue at the bottling line.

A final note on TCA...as mentioned, the effect of TCA on your sense of smell lingers for some time.  This can impair your judgement when tasting another bottle of the same wine.  You should also be sure to change any glasses which have come into contact with it.

'Brett', as it's known for short, is the second-most likely fault you may meet.  Brettanomyces yeasts are spoilage bacteria, so endemic in many wine regions (classically in Burgundy and the Rhône) that some of the traditional wine aromas from these areas are in fact due to it.  Classic Brett aromas are farm-yard (dung!),  horsey, 'sweaty saddle', or a certain kind of spiciness. Brett produces the compounds 4-ethyl guaiacol (4-eg), which smells like bacon and spice, and 4-ethyl phenol (4-ep), which can be identified as aromas of band-aids, wet dog or medicine.

A small amount of Brett in an old, traditional cellar can add a layer of complexity.  We always remember a Paso Robles producer in California telling us proudly that they have introduced some Brett into their winery to get that 'authentic' French character!  If that seems unlikely, remember that Sauternes, one of the world's great, classic wine styles, is reliant on a particular expression of Botrytis cinerea, aka Noble Rot.  The same fungus elsewhere creates Grey Rot, which is entirely negative and is a problem in vineyards around the world.

Large amounts of Brett can be a serious problem and we have heard of even top estates in classic regions occasionally having to write off the larger part of a vintage and close their winery for deep-cleaning.  Once a Brett infection has gotten out of hand it can be hard to eradicate it.

There is an ongoing debate as to whether Brettanomyces (when it contributes positive aromas such as bacon and spice) is an aspect of terroir.  Rhône wines are an interesting case in point.  When blind tasting, the aroma of bacon in a red wine often points to the Northern Rhône, particularly Crozes-Hermitage...although some producers say there are reasons other than Brett why the wines from here have this aroma.

Armed with the knowledge above, you might be able to surmise something about the wines from the two barrel cellars below: Tertre-Rôteboeuf, where the walls are delightfully lined with moulds, versus the newly-opened barrel cellar at Lynch-Bages, a rather brutalist and Huxley-esque homage utility, modernity and hygiene! (Spoiler alert!  Lynch-Bages, especially the latest vintage from this new cellar, shows magnificent fruit purity, whereas Tertre-Rôteboeuf always has complex funky, savoury. spicy aromas which are hard to describe but add so much mystery to the wine). 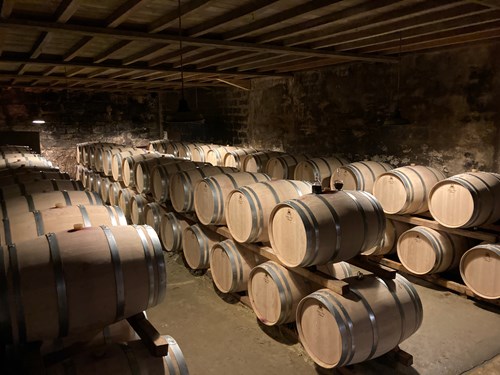 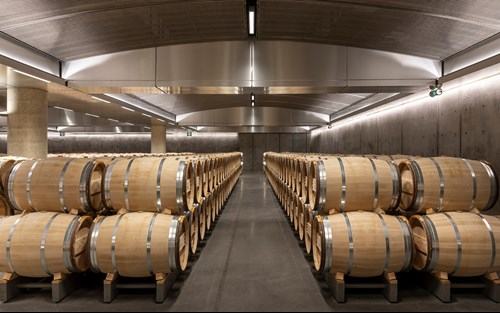 Personally, we appreciate a low level of Brett in many reds.  It can add a level of complexity to wines which can otherwise seem sterile or clinical.  If you are not a fan, it's worth remembering that, unlike TCA, Brett reduces (slightly) with aeration, so sometimes the wine can be saved by decanting.

More correctly, we should talk about excessive or premature oxidation when referring to this as a fault.  All winemaking involves the control of exposure to oxidation to some degree, as does maturation and ageing.  The question is, how much, and how far is the oxygen an intended part of the wine style?  Notably, Madeiras, some southern Italian whites and traditional white riojas (e.g. Vina Tondonia) rely on a much higher level of oxidation for their style than would be acceptable in (say) a Loire sauvignon.  You need to take the intended style into account before assessing the wine.

Exposure to oxygen will turn vibrantly-coloured reds to a hue of mahogany and limpid whites to a deep straw colour (also turning to mahogany with time).  Floral and fruit aromas fade and are replaced by nutty, 'rancio' flavours.  These can all add complexity.  The challenge is to tell whether the oxidation is intentional, or from ageing in bottle, or from the wine being exposed to too much air (e.g. left in a decanter or open for more than a few hours). 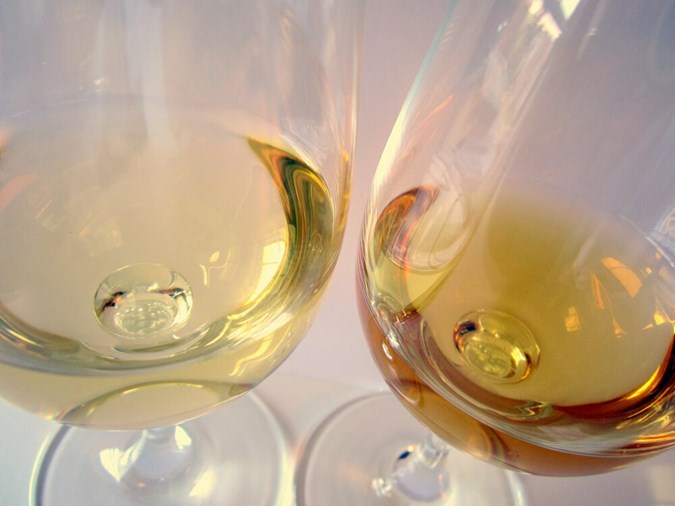 Complex as the subject is, you can comfort yourself that, unlike TCA and Brett, oxidation should be readily identifiable by most wine lovers.  Being easy to spot should make it easier to query when tasting a wine in a restaurant.  Where oxidation is a fault, it will of course only worsen with every minute the wine is exposed to air.  See our articles on How To Store Fine Wine and Serving & Decanting Fine Wine.

In the late 1990s and early noughties a very specific problem with premature oxidation arose with white wines in Burgundy.  The 'Premox' problem merits a whole article to itself!   We will post one soon.

The list is long!  Maderization, like oxidation, can be a part of the winemaking process (most obviously, with Madeira!).  Over time in bottle, the Maillard reaction (caramelisation) is one of the ageing processes which leads to complexity.  However, excessive heat can produce 'off' aromas, making fruit seem jammy or cooked and causing the colour to brown, similar to oxidation.  There is no cure for an excessively maderized or heat-damaged wine.

Sulphur (used in winemaking) can impart rotten egg smells.  This can be reduced somewhat by aeration.  A final fault to mention is Light Strike.  UV rays from the sun or artificial light transform amino acids in wine into a group of compounds known as dimethyl disulphide (DMDS) that smell like old cabbage or damp clothes.  The French term is ‘gout de fenêtre’, literally, the ‘taste of the window’, i.e., the character of a wine which has been on display in a shop window for too long.  This is particularly an issue for wines in clear glass, which includes many rosé wines.

The list of potential faults goes on, but in truth, an awareness of TCA and Brett should serve you well, as these account for the vast majority of bona fide faults, as opposed to more qualitative faults like oxidation and maderization.