The red and white burgundies from Domaine Bachey-Legros in Santenay were a huge hit in our 2018 en primeur offers, so much so that we re-offered some remaining stocks of the 2017s in the summer.  This week we had our first opportunity to taste cask samples of the 2019s, confirming our feeling that brothers Samuel and Lénaïc make some of the best value burgundies we know.

A winning combination of very old vines and a winemaking approach that emphasises richness, produces whites in a luscious style and reds which rival the Cotes de Nuits for concentration and tannic structure.  Earlier this year, Tim Atkin MW described their flagship premier cru site thus:

"Clos Rousseau would be much more famous if it were located in Vosne-Romanée or Gevrey-Chambertin rather than Santenay, such is the quality of the wines from this Premier Cru."  Tim Atkin MW, Decanter Jan 2020

The Santenay Blanc 'Les Gravieres' 1er Cru was a highlight of our tasting, with mineral aromas and exotic and tropical fruits leaping out of the glass immediately we approached it.  Judging by this and by Michelot's Gravieres Blanc (which we will offer later this month) this is a gem of a terroir and one worth knowing about.

Amongst the reds we tasted, the 2019 Santenay 'Clos Rousseau' Les Fourneaux Vieilles Vignes 1er Cru once again asserted itself the equal of wines from more famous, northerly villages, with a particular resemblance to Vosne-Romanée.  Brilliant value all of them, we recommend you pounce on these wines whilst they are available.

Amongst the blue-chip domaines of the principal Côte d'Or villages, Bachey-Legros is an outlier, both geographically and for the charming, slightly buccaneering energy of brothers Samuel and Lénaïc Legros.  Neighbouring Chassagne-Montrachet and at the southern end of the limestone ridge which forms the Côte de Beaune, Santenay is a gem of a town, with an "off the beaten track" air to it. The slopes behind the village are beautifully situated, with numerous fine terroirs. Very helpfully, these fall into distinct sub-zones, with more oolitic limestone in the soils neighbouring Chassagne giving more powerful wines, versus more limestone-marl soils to the south, giving more finesse.

The Legros brothers have 18 hectares here, inherited from their grandfather who, by 1993 had almost ceased wine production, contracting out many of his vines to other growers. It was Sam and Lénaïc's mother, Christiane, then living and working as a psychologist in Dijon, who returned to the family domaine to begin re-building it, gradually taking back control of vineyards as those leasing contracts expired (maybe this is why it feels as if this domaine has come from nowhere and remains relatively undiscovered). Today, it still has the air of a work in progress, with the unrestored stone buildings pressed into service at what is clearly a growing business. 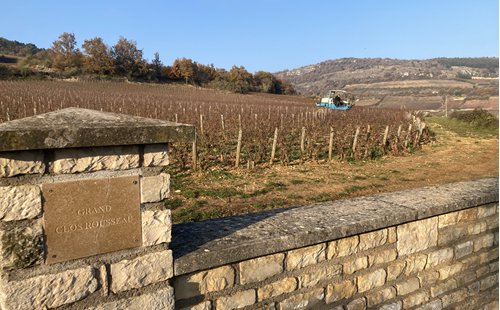 The Clos Rousseau, on the upper slopes to the South of Santenay

In contrast to the sleepy air at most of the domaines we visited, Bachey-Legros was a hive of activity, with a lorry delivering a huge quantity of frost candles for the winter ahead (quite an investment, at 8 Euros each, with 300-400 needed per night, per hectare). There was also a mobile bottling line in full swing, with bottles being packed by a young team in another outbuilding. Sam and Lénaïc themselves project a laid-back energy and are instantly likeable. The other thing which stands out here is the volume of wine in tank and in barrel (compared to the many bare-looking cellars we visited). We have said several times over the last couple of years what amazing value this domaine's wines are. Seeing it in person really helps to understand how they achieve this, with a combination of outstanding raw materials (their holdings of ancient vine are second to none) and an unstuffy, no-frills approach.

Old vines play an important role in their success and you will see the vineyard planting dates proudly listed next to many of their wines, from 1950 for 'Les Charmes' back to 1914 for 1er Cru Clos Rousseau 'Les Fourneaux'.  Caring for these old vines is clearly a labour of love and they describe themselves as working like 'curators in a botanical museum'!  Deep-rooting older vines are very resilient to annual vintage variations, giving consistently brilliant wines each year.