Released for sale en primeur this morning at £2,550 per six bottles, 2021 Château Margaux was possibly our favourite wine of the vintage when we tasted it in April and we recommend adding it to your cellar, if an allocation is available.

We tasted in the beautiful, palladian cellar (below) with its long colonnades, which must have been awe-inspiring when it was built in 1815.  It took us a few moments to realise that our host was Alexis Leven-Mentzelopoulos, son of the chateau's famous owner, Corinne Mentzelopoulos, a welcome reminder that this billion-dollar business is still very much a family concern. 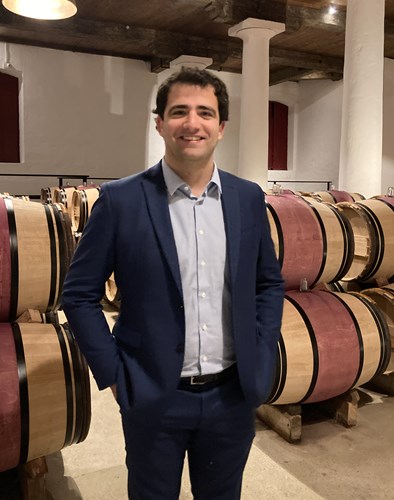 The 2021 was the most Margaux-like vintage we have tasted in en primeur in a long time, and for us, it's the key-note of the vintage.  Recent vintages may have more power, but none have more vibrant energy and finesse.  The velvet tannins are the epitome of what Margaux (both the commune and the château) are about.  The Wine Advocate's William Kelley seems to have experienced the wine in a similar way:

"Combining the vibrant flavors and moderate alcohol (13.1%) of a vintage of the last century with all the precision of the present in extraction and élevage, it is a timeless classic; and lest that be mistaken for a euphemism for a lack of concentration, note that the wine is analytically as high in polyphenols as the brilliant 2019. (95-97 points).

Availability is very restricted in 2021 so please let us know as soon as possible if you would like an allocation of this classic vintage.

There is also a small quantity available of the beautiful 2021 Pavillon Rouge - please enquire.

Limited availability.  To order, e-mail us at sales@richardkihl.ltd.uk

Château Margaux is a Premier Grand Cru Classé located in the commune of Margaux.   It was first recorded an a manor in 1152, known as “La Mothe de Margaux”, La Mothe meaning 'mound'.  In the 16th century it was owned by the Lestonnac family, who converted the estate from growing grain to vines.  By the end of the 17th century the estate had reached its current size of 265 hectares, with a third of this dedicated to vine growing.

Margaux's winemaker at the end of the 18th century was named Berlon.  He introduced many winemaking practices which influenced the entire region, such as not harvesting in the early morning when there was dew on the grapes (to avoid dilution) and identifying particular terroirs across the estate.

The estate was confiscated during the revolution but in 1810 it was acquired by the Marquis de la Colonilla, who had the distinctive neo-Palladian château built by architect Louis Combes.  This was an early example of a grand but purpose-built château, constructed with the cellars and winery as part of the design, a sign of how seriously winemaking was taken by this stage.  The practice of bottling a second wine was also first introduced at Margaux, with Pavillon de Margaux having been formally in existence since 1906.

Post-WWII, Margaux was owned by the Ginestet family, who struggled after the 1973 oil crisis and were eventually forced to sell in 1977 to Greek supermarket magnate Andre Mentzelopoulos.  When he died in 1980, his daughter Corinne took over, aged just 27, but was assisted by oenologist Emile Peynaud.  In 1983 Paul Pontallier joined as estate manager, working with Mentzelopoulos to transform quality here until his death in 2016.

A new winery was constructed in 2015 by Lord Norman Foster.  Philippe Bascules succceded Pontallier as Managing Director, having joined the estate in 1990.  Corinne's daughter Alexandre Petit-Mentzelopoulos is also involved in the running of the estate as Deputy General Manager.

The 82 hectares of vineyards are planted to 75% Cabernet Sauvignon, 20% Merlot, 3% Petit Verdot and 2% Cabernet Franc.  Farmed organically since 2017, the estate is also trialling biodynamics.